Jolly Jong is the original game in the famous series of mahjong solitaire games. With 100 levels and an intriguing scoring system, this game features endless mahjong fun. There is no time limit, so there is no need to hurry. Except if you want to the highest score, because matching multiple pairs after each other results in bonus points. 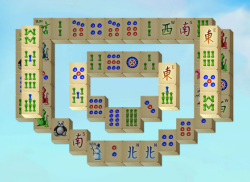 Jolly Jong uses the classic mahjong tiles. One of the dragon tiles is a panda tile!

Jolly Jong follows the traditional mahjong solitaire rules. Match identical tiles to remove them from the layout. Tiles in the flower and season group can be matched with any other tile of the same group.

There is no time limit in Jolly Jong.

For matching a pair of tiles you earn five points. If you make multiple matches quickly after each other, you get bonus points.

Select and match tiles using the mouse. Open tiles are shaded differently from blocked tiles to help you.

Jolly Jong is developed by Zygomatic. The next game in this mahjong games series is Jolly Jong 2.