Mahjong Titans is a straightforward mahjong solitaire game following the classic rules. It first appeared as a Flash game and has now returned in a new technology that will work for many years to come. There is no hint and no shuffle button, so prepare for a more difficult game compared to some others. Remove all tiles from the Turtle layout and watch the volcano erupt. 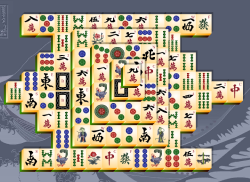 The tiles used in Mahjong Titans are classic mahjong tiles, crisp and easy to distinguish. The season tiles might be different from what you are used to, they are displayed as ladies.

There is only one layout in this version of mahjong: the classic Turtle layout.

Remove tiles from the board by creating pairs of matching tiles. To match tiles, they must be open. This means their left side or their right side is open.

Tiles can only be matched if they are identical, except for the season and flower tiles. They can be matched with any other tile in their group, even if they are not identical.

Mahjongg Titans is a straightforward game without too many bells and whistles, so it doesn’t have a time limit.

Mahjong Titans was developed by Petr Mizerov and first appeared as an Adobe Flash game, back in 2002. Now it has been converted to HTML5 technology so you can continue to play it for many years to come.

Note that Windows Vista and Windows 7 also had a game called Mahjong Titans, but that’s a different game. It had six layouts (Turtle, Dragon, Cat, Fortress, Crab, Spider), allowed to change the appearance of the tiles, and had six different backgrounds. In the meantime the Windows game has changed name to Microsoft Mahjong. This means that the real Mahjong Titans game is the one we feature on this page.

To match and remove two identical tiles, use the left mouse button to select them.

Mute or unmute the sound in the right top corner. Restart the game by clicking the button in the right bottom corner.