Simpsons Mahjong is a cross between Mahjong Connect and a Match 3 game. The goal in this mahjong game is to remove all tiles from the table, which have images of the animated series characters on them such as Homer, Marge and Bart. The layout of the tiles is the same as in Mahjong Connect. Groups of 2 or more identical tiles that are adjacent (horizontal or vertical) can be removed, simply by clicking on them. The official name of this Simpsons game is actually Tiles of the Simpsons. 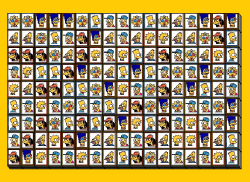 Simpsons Mahjong is played with tiles that have the characters of The Simpsons on them. The stars of the animated series such as Homer, Marge and Bart are on the tiles.

The goal of the game is to remove all tiles from the board.

The tiles are laid out randomly in a grid that resembles Mahjong Connect. The tiles are stacked two levels high.

Tiles can be removed by clicking on groups of 2 or more identical tiles that are adjacent (horizontally or vertically). If a gap is created in the grid, the tiles above will move down. The new groups that are created this way are automatically checked for matches, and can earn you combos (points and bombs).

If there are no more moves possible, a bomb icon will appear on screen. This bomb can be used to remove any tile on the screen. To know how many bombs there are left, look at the left of the screen.

There are 3 levels to complete in this Simpsons game.

There is no time limit in this mahjong game. You have as much time as you want to try to complete the 3 levels.

The game is developed by jwkk.biz, a Czech game developer.

To remove a group of adjacent identical tiles from the table, just tap one of them or click on one of them with the left mouse button.