War Mahjong is inspired from both Mahjong Connect and Match 3. This war-themed game is also known as the ‘Tiles of the Unexpected’. The objective is to pair identical tiles that are next to each other in a horizontal or vertical manner, and clear the entire layout. When no moves are available, you can play a bomb to let a chosen tile explode and be cleared from the layout. Try to reach the highest possible level! 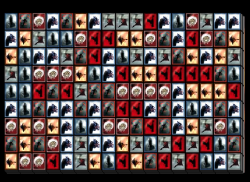 War Mahjong uses a special war-themed design for its tiles.

You have to select two or more identical tiles positioned next to each other in a horizontal or vertical manner. These selected tiles will then disappear, and a second layer will become visible in that place. You can select tiles across different layers throughout the game. When you reach the bottom layer, the tiles will start to fall down, and big movements in the layout will occur.

There is no time limit in this game.

Try to finish levels and reach the highest possible one!

You can simply select a pair of identical tiles by clicking on one of the two tiles.